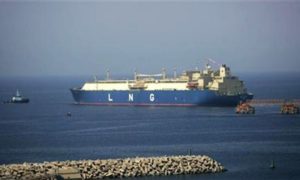 ISLAMABAD: Amid the federal cabinet decision to incentivise future LNG terminals, the Port Qasim Authority (PQA) will charge about $25 million upfront charges each to five potential LNG terminal operators that may increase their re-gasification tariff.

A meeting of the federal cabinet presided over by Prime Minister Imran Khan a few days ago approved a reform programme for oil and gas sector as part of its ease of doing business initiative. Energy Minister Omar Ayub Khan and Special Assistant to the PM on Petroleum Nadeem Babar told a news conference on Aug 29 that five international companies — Shell, ExxonMobil, Mitsubishi, Trafigura and a French firm — had been allowed by the cabinet to set up terminals for the processing of imported liquefied natural gas without any government permission or involvement.

There would no longer be any sovereign guarantees extended to these projects, nor any capacity charges, and no offtake commitments. Instead the terminal operators would only need site allocation from the port authorities, and import LNG and supply it to their own private customers, Mr Babar had announced.

Subsequent to the cabinet decision, the PQA has notified guidelines for setting up of floating and offshore LNG terminals on the build, operate and transfer basis that require applicants to pay a new concession fee of $10m, a performance bond of $10m and minimum guarantees $3m as well as a minimum royalty of $1.9 per tonne. In addition, the terminal operator will also be subject to pay $3m per month of liquidity damages for delayed completion.

“All this puts the future operators at a very disadvantage when compared with two existing terminals having ‘take or pay’ agreements with the government and which were not subjected to concession fee and many other charges,” said an official associated with the petroleum division. He said the investors would build these costs to their tariff that would be higher than those of the existing terminals.

He said the petroleum division might send a note to the Prime Minister Office asking the PM to look into the matter because intending investors were claiming that they now stood subjected to 25 per cent additional cost. “One of them said his company may not be interested to set up the terminal,” the official said, adding that in an environment of high interest rates, this translated into additional 10 US cents to the tariff.

This goes against the Pakistan Tehreek-i-Insaf’s argument of expensive terminals set up during the Pakistan Muslim League-Nawaz government and may ultimately lead the incumbent government to request the existing terminals to increase their capacity. The new terminals have already been delayed by almost a year.

Interestingly, the government currently is required to pay about half a million dollar per day to existing terminals as processing fee even if it does not offtake LNG.

According to guidelines issued by the PQA, the terminal concession will be for 30 years from the date of signing of implementation agreement.

The investor will be responsible for dredging of thee berthing basic including the approach to the terminal jetty from navigational channel. LNG terminal developer for the LNG site must first agree to forego, revoke, cancel any and all rights that it may have in respect of the QRA and/or any respective site for which it possesses any vested right from any government regulators including PQA from which it has obtained any approvals for sites etc in respect of development of the LNG terminal.

The terminal owner will be required to transfer the project assets to the PQA free of cost on completion of concession period in properly maintained and operational condition acceptable to an independent audit engineer so that the structure does not require a major repair for 10 years and electronic and mechanical systems for five years after the handover to the PQA.

Based on www.dawn.com by Khaleeq Kiani