The IEA launches the WEO 2019: the impact of today’s decisions on tomorrow’s energy systems.

The IEA launches the WEO 2019: the impact of today’s decisions on tomorrow’s energy systems. 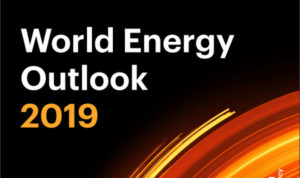 The International Energy Agency launched the World Energy Outlook 2019, which focuses on the impact of today’s decisions on tomorrow’s energy systems, and describes a pathway that enables the world to meet climate, energy access and air quality goals while maintaining a strong focus on the reliability and affordability of energy for a growing global population.

This year’s outlook comes in a moment when deep disparities define today’s energy world: the dissonance between well-supplied oil markets and growing geopolitical tensions and uncertainties; the gap between the ever-higher amounts of greenhouse gas emissions being produced and the insufficiency of stated policies to curb those emissions in line with international climate targets; the gap between the promise of energy for all and the lack of electricity access for 850 million people around the world.

The Current Policies Scenario provides a baseline picture of how global energy systems would evolve if governments make no changes to their existing policies. In this scenario, energy demand rises by 1.3 per cent a year to 2040, resulting in strains across all aspects of energy markets and a continued strong upward march in energy-related emissions.

On the other hand, the Stated Policies Scenario incorporates today’s policy intentions and targets in addition to existing measures. It describes a world in 2040 where hundreds of millions of people still go without access to electricity, where pollution-related premature deaths remain around today’s elevated levels, and where CO2 emissions would lock in severe impacts from climate change.

Finally, the Sustainable Development Scenario indicates what needs to be done differently to fully achieve climate and other energy goals that policy makers around the world have set themselves.

“What comes through with crystal clarity in this year’s World Energy Outlook is there is no single or simple solution to transforming global energy systems,” said Dr Fatih Birol, the IEA’s Executive Director. “Many technologies and fuels have a part to play across all sectors of the economy. For this to happen, we need strong leadership from policy makers, as governments hold the clearest responsibility to act and have the greatest scope to shape the future.”

Electricity is one of the few energy sources that sees rising consumption over the next two decades in the Sustainable Development Scenario. Electricity’s share of final consumption overtakes that of oil, today’s leader, by 2040. Wind and solar PV provide almost all the increase in electricity generation.

Putting electricity systems on a sustainable path will require more than just adding more renewables. The world also needs to focus on the emissions that are “locked in” to existing systems. This year’s WEO considers three options to bring down emissions from the existing global coal fleet: to retrofit plants with carbon capture, utilisation and storage or biomass co-firing equipment; to repurpose them to focus on providing system adequacy and flexibility; or to retire them earlier.
The International Energy Agency (IEA) is an autonomous organisation which works to ensure reliable, affordable and clean energy for its 30 member countries and beyond. Its mission is guided by four main areas of focus: energy security, economic development, environmental awareness and engagement worldwide.

Budapest LNG Summit is honoured to welcome HE....

70 per cent of the world's proven natural gas reserves are located in the countries...

Comments Off on Budapest LNG Summit is honoured to welcome HE. Yury P. Sentyurin, Secretary General of Gas Exporting Countries Forum (GECF) as a keynote speaker of the conference.