LNG market in CEE has potential, but lacks infrastructure

LNG market in CEE has potential, but lacks infrastructure 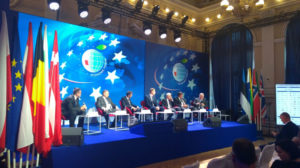 With Russia’s Nord Stream 2 pipeline nearing completion and amidst fears that Ukraine will not strike a new gas deal with Russian energy giant Gazprom, Poland and the United States have agreed to support Ukraine’s energy security by increasing energy transfer capacities and delivering up to six billion cubic metres of LNG from 2021.

Speaking at a panel discussion on the future of energy in at the Krynica Economic Forum in Poland on September 4, Polish government representative for energy Piotr Naimski said that an upgraded interconnector at the Polish-Ukrainian border, as well as the Baltic Pipe, which will be completed in 2022, will make Poland ready to transfer US-imported LNG to Ukraine.

“It’s just a matter of time before LNG producers, particularly the US, will develop in such an extent that this form of raw material supply will be competitive with natural gas,” he told the audience.

Discussing the prospects for the liquified natural gas market, Rutger Huijgens, BP’s director for European government affairs noted that energy supplies were becoming more indigenous while imports were increasing. “As a consequence, there will be an increase in countries supplying LNG to the EU: Azerbaijan through the Southern Gas Corridor; Egypt has recently started exporting LNG and we also see developments in Senegal – overall there is an increase which will greatly help with the diversification and security of energy in Europe,” he said.

The US is poised to be the biggest LNG provider over the next five years, with an annual export volume of 500 billion cubic metres.

“In EU terms, every ninth cubic metre of gas is coming through LNG [and] this will at least double by 2030,” Szabolcs Ferenczi, chairman and CEO of Hungary’s natural gas transmission company FGSZ added, stressing that “this is clearly a market that is opening up.”

For Hungary, however, this might not be the case since being a landlocked country poses obstacles for LNG imports.

Attila Nyikos, the vice president of the Hungarian Energy and Utility Regulatory Authority believes that the optimal outcome for the Hungarian energy mix would be a combination of three sources: Hungary’s own natural gas reserves, Russian gas imports and non-Russian imports. “This can be LNG,” he said, adding that he would maximise domestic production and keep Russian imports “at a healthy level.”

Piotr Woźniak, the president of Polish national gas company PGNiG noted that LNG will occupy at least 30 per cent of the world’s gas market by 2030 since “regasification is not fully utilised” at this point. “We don’t need three sources, only two,” he told Mr Nyikos, noting that Russian gas is extremely expensive in Poland while US-imported LNG is 20-30 per cent cheaper.

According to Mr Huijgens, there is a lot of room to grow imports since LNG terminal utilisation capability is currently at just 31 per cent in Europe. “The real questions is: are all the interconnectors in place to ensure consumption?” he continued, pointing to a major Central and Eastern European challenge.

“The infrastructure in CEE is still missing,” Mr Ferenczi said, adding that Romanian gas production on the Black Sea was more promising from this viewpoint as it could have covered half of Hungary’s consumption. However, this will not happen anytime soon: in August, US energy giant ExxonMobil announced that it was pulling out of the Romanian offshore gas project.

Mr Naimski noted that the infrastructure issue cannot be resolved at a pan-EU level since the barrier is between two isolated systems under the control of either Germany or Russia. “When we talk about Central Europe, the infrastructure possibilities are there, but they need to be extended,” he said, adding that there will be a possibility for Poland to transfer gas from the Baltic Sea to Slovakia and Hungary by 2021.

Donatas Jasas, a board member of the National Energy Regulatory Council of Lithuania, added that the Baltic States can expect similar opportunities via the Baltic Pipe’s Polish-Lithuanian interconnector.