The newest addition to the Trans-European Transport Networks (TEN-T) is situated at the Szigetszentmiklós resting station of the M0 orbital motorway at the southwest edge of the capital, awaiting truck drivers. 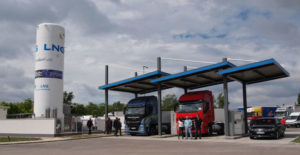 Hungarian track companies can now use environment-friendly vehicles running on LNG, with a range of up to 1,500 km.

The station was realized as part of the PAN-LNG project, which was selected as a supported project of the Connecting Europe Facility (CEF), a key EU funding instrument to promote growth, jobs and competitiveness through targeted infrastructure investment. The primary goal of the project is to prepare the construction of an infrastructure network that supports LNG-based transportation in Hungary. Due to the construction of the Szigetszentmiklós LNG refueling station, Hungary was able to join the  Trans-European Transport Networks (TEN-T), prolonging one corridor by 550 kilometers, and another by 420 km.

Work on a domestic LNG-producing plant has also started, the PAN-LNG project calls for and is to finance a plant that provides supply for the station. The total costs of the project amounts to EUR 1.2 million, 85% of which came from EU resources. The station was built by Pannon Fuel Kft. The company has pioneered with this venture, since LNG has to be delivered from quite a distance to the fueling station at this point, yet the GLE (gasoil liter price index) that compares LNG and gas oil prices based on energy still shows an upbeat, making it worth both for the provider and for the customer to make use of the Szigetszentmiklós plant. To top it up, the LNG prices are quite stable throughout Europe, therefore the sweet deal is here to stay.

Environmental issues are inevitably enhancing public outcry for a change in habits, which predominantly started with the change in fueling habits. Using LNG stations and trucks means an instant 25% reduction of CO2, an 80% reduction of NOx and 80-90% reduction of PMs, which are mainly responsible for air pollution.

But delivery companies and truckers are more enthusiastic about the costs, which include the ownership of the trucks, all the taxes and fees related to keeping those trucks on the road, doing business with them and obeying all the laws at the same time. So far LNG trucks purchase price is even higher than that of diesels, however, several EU countries have introduced a one-time governmental purchase support or a tax-back method to boost the moods of professional truckers and to deter the economy towards a more environment-friendly direction.

Based on www.bbj.com by Bence Gaál