Novatek: US sanctions will not affect the Yamal LNG project

Novatek: US sanctions will not affect the Yamal LNG project 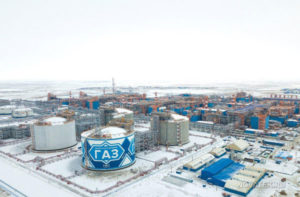 Russian gas producer Novatek reassured that the Yamal LNG project in northern Russia will not be affected by the recent US sanctions imposed on two units of Chinese shipping conglomerate COSCO, for allegedly carrying Iranian crude oil.

US-listed Teekay LNG, owner of four tankers shipping gas for the Yamal LNG plant, has also been blocked. In fact, its partner China LNG Shipping (CLNG) is 50 per cent owned by COSCO Dalian, which makes Teekay indirectly tied to the Chinese shipping group as well.

“That indirect 50 per cent interest causes our joint venture company to be a blocked person under the US rules,” Teekay confirmed.

“The issue to resolve this situation is a business relations matter between Teekay LNG and CLNG,” stated Novatek. “The Yamal LNG project has all the necessary capacities to ensure supplies of LNG produced to customers in accordance with contractual obligations within the agreed timelines.”

In fact, the Yamal plant has been producing and shipping LNG above its expected capacity of 16.5 million tonnes a year (mtpa), reaching in 2019 12.8 mtpa.

At the same time, Novatek is working on the construction of three LNG reloading points that might allow tankers to only sail in Russian waters, thus avoiding possible new sanctions.

Moreover, early in September, Novatek approved a final investment decision for the Arctic LNG 2 project, consisting of the development of the Utrenneye field and the construction of a natural gas liquefaction plant on the Gydan Peninsula in the Russian Arctic region. The LNG plant will consist of three liquefaction trains with overall production capacity of 19.8 million tons per annum, starting from 2023.

Mark Gyetvay, CFO & Deputy Chairman of the Management Board at NOVATEK, will be one of the speakers of Budapest LNG Summit.