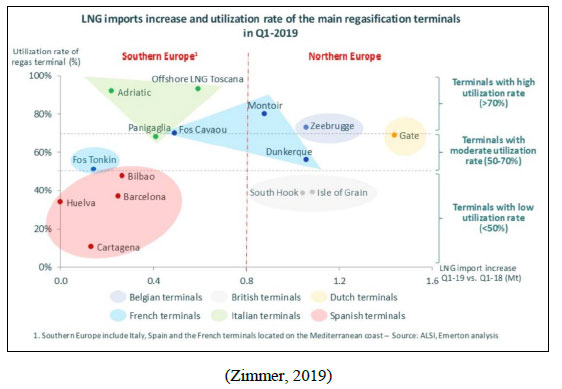 Global LNG trade is buoyant due to a wave of new sources of LNG supply. What were historically distinct, regional LNG markets are becoming increasingly interconnected as the global LNG market evolves and diversifies. Against this background, Europe’s LNG import terminals are gaining momentum and prominence in the global LNG market.

The Northern European LNG import terminals have, on balance, absorbed higher levels of additional LNG volumes than the Southern European LNG import terminals. The highest increase in LNG imports (and therefore terminal utilisation rates) in 2018 was in the Netherlands (Gate), followed by Belgium (Zeebrugge), Turkey, Poland, and France.  2018 saw only moderate increases in LNG imports into the UK where utilisation rates remain relatively low. LNG imports into Spain – which has the largest regasification capacity in Europe – decreased slightly in 2018, in part due to Spain’s relatively illiquid gas wholesale market (compared to some of its North European neighbours).

Historically, the global LNG market has been dominated by the oil and gas majors and NOCs (on the supply side), and large utilities and power producers (on the buyer side). The growth of the LNG spot market, and new opportunities to take short-term positions, has created an environment in which smaller players can take a position in the LNG market without being exposed to long-term take-or-pay commitments or significant capital expenditure.  Recent years have witnessed the global LNG market start to open up to new types of entrants, nowhere more so than in the US, where the growth of the LNG export sector has largely been driven by a range of independent gas companies and private equity outfits (such as Cheniere and Freeport).

The European LNG market is also starting to open up to new players. A number of LNG commodity traders (who do not own the gas at source) are becoming increasingly active in the European LNG spot market – such as Vitol and Trafigura.  There are also signs that private equity firms are dipping their toes into more long-term positions – as seen by Ancala Partners’ recent acquisition of a 50% interest in Dragon LNG (an LNG import terminal in Milford Haven, Wales) from Petronas LNG. In fact, as the European LNG sector diversifies and expands, new entrants are emerging at every stage of the LNG supply chain, all the way down the line to LNG-fuelled cruise ships.

There are currently in the region of 22 large-scale LNG import terminals being considered or planned in Europe, all of which would be located within the EU, except the planned terminals in Ukraine (Odessa FSRU LNG), Russia (Kaliningrad LNG), Albania (Eagle LNG) and Turkey (FSRU Iskenderun and FSRU Gulf of Saros).

Many of these planned import terminals are in countries with existing regasification capacity, including Greece (where one additional import terminal is planned – Alexandroupolis), Italy (which is planning two additional terminals in Sicily and Calabria), Poland (FSRU Polish Baltic Sea Coast), Turkey (two FSRUs) and the UK (which is planning the Port Meridian FSRU LNG project, and  Trafigura Teesside LNG which was previously operated by Excelerate Energy but decommissioned in 2015).

Ten of the planned terminals are FSRUs in: Albania, Croatia, Cyprus, Germany (Wilmshaven), Greece, Ireland, Poland, Russia, Ukraine and the UK. In addition, there are numerous plans for expansion of existing terminals or terminals currently under construction, including in Belgium, France, Greece, Italy, the Netherlands, Poland, Spain, Turkey and the UK.

This section highlights some of the recent activities in individual European LNG importing countries, without being exhaustive:

The final investment decision on the 2.6 bcm FSRU LNG terminal on Krk Island was taken in January 2019, despite a lack of substantial market demand from the open season procedure to underpin the project.  The investment costs for the terminal are being met by: (i) an equity injection of €32.2 million from the LNG terminal company shareholders – LNG Croatia d.o.o (owned by the Croatian state owned oil and gas company) and Plinacro d.o.o (the Croatian transmission system operator (TSO)); (ii) a €108 million grant from the EU’s Connecting Europe Facility (CEF); and (iii) €100 million from the Croatian State Budget (which the European Commission approved as being compatible with EU State aid rules).

The EU Commission’s support for the Krk Island project stems from its ability to get gas into Central and South-Eastern Europe – areas which have historically been dependent on Russian gas – and as such has been designated as a European PCI since 2013.  It will deliver gas into Croatia’s national transmission network which is connected to Slovenia, Italy and Hungary, as well as into other EU countries via non-EU Serbia and Montenegro.

Greece’s only existing LNG terminal at Revithoussa received €50.8 million of EU funding for its expansion project which was completed in November 2018. Facilities to provide large- and small-scale reloading services are under construction at Revithoussa, and the terminal also plans to offer truck loading services by 2022. LNG imports to Revithoussa declined slightly in 2018 compared to 2017.  A second terminal – Alexandroupolis FSRU – which is being developed by Gastrade and DEPA, is due to start up in 2021 although FID has been postponed.

Italy has three LNG import terminals. Two of these – the FSRU OLT Toscana Terminal and (onshore) Adriatic LNG – have been running at high levels of utilization in the first half of 2019 (up to 92%).  The Italian wholesale gas market has been offering a price premium over NBP and TTF prices, and these two terminals have adopted innovative capacity allocation procedures based on auctions starting from a reserve price lower than previous tariffs and linked to LNG market prices.  Historically, LNG spot volumes have been deterred from unloading in Italy due to relatively high regasification tariffs.

The Independence (Klaipeda) FSRU project received €27.4 million of EU funding for connecting pipelines (from CEF). The terminal continues to play an important geo-political role by reducing Eastern Europe’s dependence on gas from Russia since first imports in 2014.  The Independence FSRU is currently leased by Klaipedos Nafta from Norway’s Höegh LNG until 2024. In December 2018, Lithuania gave the go ahead to state-owned Klaipedos Nafta to purchase an LNG storage vessel by late 2024 with the aim of reducing annual lease and operational costs.  In 2018 Klaipedos Nafta launched a €27 million LNG reloading station to pump the gas into LNG-powered vessels and onto road-going trucks.  LNG imports into

Poland’s 5 bcm/y Swinoujscie terminal has received €332 million of EU funding – €130 million from EEPR and €202 million from the European Regional Development Fund – showing the EU Commission’s commitment to diversifying sources of energy supply in Eastern Europe and to reducing the region’s dependency on Russian gas. It is currently executing the Terminal Expansion Program that consists of: (1) additional regasification capacity; (2) a third storage tank; (3) LNG to rail trans-shipment facilities; and (4) a second jetty.  In 2018, LNG imports to Poland (from Qatar, Norway and the US) increased by nearly 1 bcm (+58%) compared to 2017, reaching over 2.7 bcm (after regasification), and the terminal had one of the highest utilisation rates in Europe. In March 2019, the Swinoujscie terminal performed its first bunkering operation.

Based on: https://www.natlawreview.com by  Ryan Pereira, Gaffney, Cline & Associates