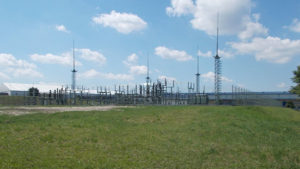 The station will allow the delivery of 1.75 billion cubic meters of gas from Romania to Hungary via the ROHU gas pipeline. The cross-border pipeline is already capable of delivering this amount to Romania, and as a result of this 6 billion forints investment, the possibility of reverse transmission will significantly expand.

“The investment in Csanádpalota as part of the ROHU gas pipeline development is an important milestone in the BRUA gas pipeline project,” said FGSZ Chairman and CEO Szabolcs Ferencz I. “The BRUA project is implemented with international cooperation, and aims to establish a gas corridor connecting Bulgaria, Romania, Hungary and Austria. I am proud of the performance of my colleagues and partners involved in the construction, which has enabled the Csanádpalota compressor station to be built in a cost-effective way while meeting high professional standards.”

The pipeline is currently operating at full capacity between Hungary and Romania, and gas transport to Hungary is expected to start by mid-2020 following the developments of the Romanian side. As much larger volumes of bi-directional gas transport are thus available at the south-eastern border of the country, other gas resources besides the Romanian one may be transported to our region in the future. The supply security, the development of the regional energy market and the BRUA gas pipeline playing a crucial part in the dynamics of bilateral energy connections all contribute to the importance of this project for Hungary.

“Security of energy supply means a historic challenge for the countries of the European Union,” said the Hungarian Minister of Foreign Affairs and Trade Péter Szijjártó.

In fact, after negotiations with Russian giant Gazprom, Hungary’s natural gas supply has been guaranteed until the winter of next year and all of the country’s gas storage facilities are full.

“We will see progress only if each country develops its own infrastructure and interstate connections, which also allows us to receive gas from new sources,” continued Mr Szijjártó. “Hungary has completed its task, and words were followed by actions: from May 2020 on, 1.75 billion cubic meters of gas may be transported annually. It has great importance not only for Hungary and Romania but also relevant for the whole region of South-Eastern Europe. It’s time for the other countries to do their homework as well.”

FGSZ is a partner of the Budapest LNG Summit.